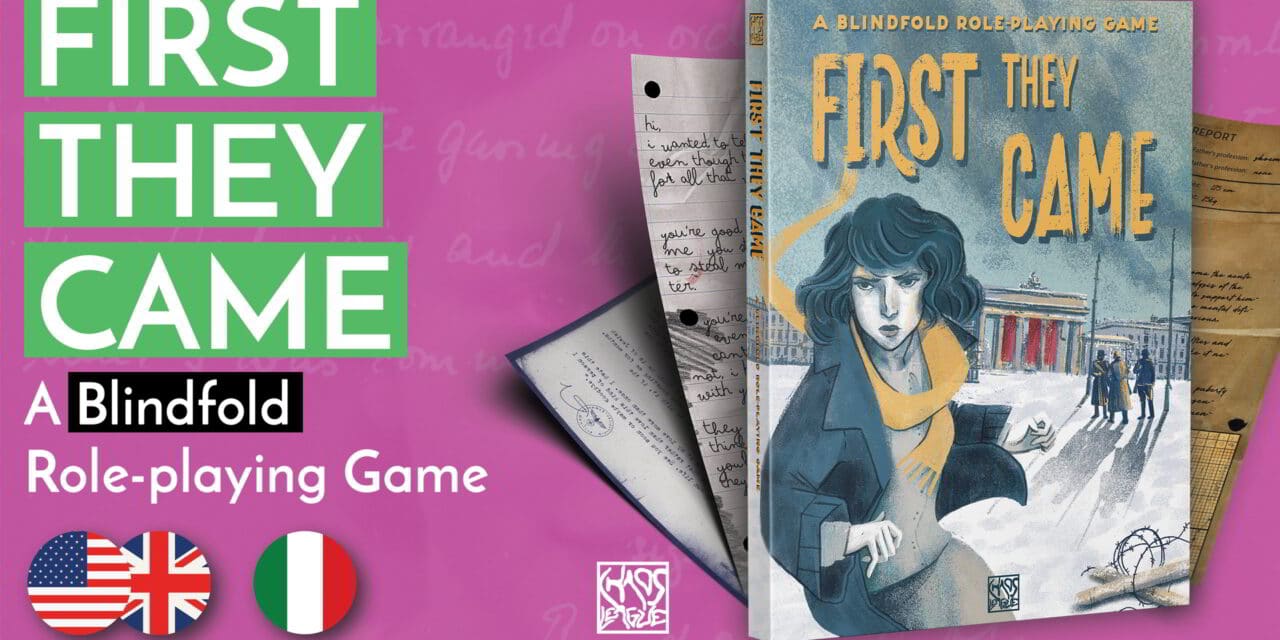 Let's see the RPG Kickstarter campaign First they came, published by the Chaos League and in which you play a group of fugitives in the Berlin of 1942!

I believe that this poem, extracted and revisited from a sermon by Pastor Martin Niemöller, is well known to all who read us. The theme of this poem is apathy towards abuses suffered by those less fortunate than us, explaining how such an attitude is harmful not only for others, but also for ourselves.
But what does Niemöller's poetry have to do with role play?
Well, these days the crowdfunding campaign on Kickstarter for an RPG that deals with these issues has started.
We are obviously talking about First they came (FIRST THEY CAME), published by Chaos League.
Let's see what this game is about and how its Kickstarter campaign is structured.

Click here to see the Kickstarter of First they came

What is it about? First they came?

First they came it's a role-playing game masterless per one-shot of 2-3 hours e from 3 to 5 players / trici.
It is designed to be played without preparation and to give a hybrid experience between tabletop role-playing and chamber LARP, focusing everything on creating an immersive experience.

In First they came, who plays will play a person persecuted by the Nazi regime. She may therefore be persecuted for religious (Jehovah's Witnesses), ethnic (Jewish, Roma, Slavic), political (Communist, dissident) or gender (transgender or intersex) / sexual orientation (homosexual, bisexual, etc.) reasons. ).
The characters will have to hide to escape the Nazi roundups, taking refuge in a dark attic.
However, in their escape, they will also have to deal with the guilt and with the ghosts of the past. Because yes, they too are not totally innocent, because they have turned their backs on those who were rounded up before them.
Each character will be created at the beginning of the session by customizing and contextualizing the information given by Personal documents. After character creation, they will play several Flashback, in which the past of these persecuted people is created and explored all together. Each character is freely inspired by a real person.

The game will focus on exploring the emotions and choices of the characters. Because, in fact, to survive and escape before the Nazis arrive, they will have to take some choices painful and difficult. And being too late or doing nothing will mean everyone will be caught.
Once the decision has been made or the characters have been captured, the scenes of Epilogue. Here you will see what happened to the various characters after this event.

The mechanics of First they came

To increase the immersion of the experience, First they came is an RPG meant to be played in the dark, or blindfolded. In this way, you will be better able to step into the shoes of the persecuted and forced to hide in a dark attic, without even being able to see each other.
During the game, you will hear several audio tracks who will stage the sounds that the characters will hear, like the Nazis looking for them in the apartments below. Several tracks on the Nazi search will be available, each with a different duration.
In this way, First they came it is replayable, as you cannot predict in advance how long the new track will last.

Security in First they came

As we have already said in several articles (such as the one about rape in the RPG, the one on strong themes e the one on gender play 2), in roleplaying you can talk about pretty much anything, including strong and raw themes.
However, it is always important that those who play are always informed about the issues that will be played. In addition, it is essential to set up safety mechanics that allow players to have control over the level of detail with which they want to address these issues.

In this sense, First they came he is well aware of dealing with complex and difficult issues, such as discrimination and persecution carried out in Germany during the Second World War.
Therefore, within the manual there will be tools and advice on how to manage these issues.

The first edition of First they came

The edition presented in this Kickstarter is a new, in-depth and improved version of the very first edition of First they came.
In fact, this role-playing game first appeared in the LARP scenario collection Growing up Playful, edited by Dreamlord Games. Should you wish to test First they came (plus many other interesting LARPs), this collection may be for you.
The most substantial change is that, in its first edition, this title could support three players / trici, against 5 in the new edition. A further addition are the historical essays, written by authors from around the world.

How is the Kickstarter of First they came?

The Kickstarter campaign of First they came has a target of € 4.000 e it will end on April 25th
The game materials consist of:

The pledges of First they came

This RPG has four levels of pledge:

How is the Kickstarter doing First they came?

Currently, First they came it was fully funded, raising over 6.900 € by over 280 supporters.
The first stretch goal was therefore unlocked, namely the Companion. It is a booklet with additional material, consisting of essays and articles written by both historians and role-playing experts, activists and educators.
The next stretch goal will be unlocked at € 10.000 and will consist of a new character.

Personally, I am very interested in First they came and I would gladly try it.
I believe it has great educational potential and that could allow you to easily put yourself in the shoes of a person persecuted by the Nazi regime, thus learning to have empathy towards those who are victims of discrimination and persecution.
Therefore, I also believe it is also good that this game is also brought into educational contexts, like that school. I therefore look with approval to the idea of ​​the training workshop.